2017 ended and the new video games you’d been anticipating have been pouring out. Whether you’re interested in RPG, racing, or virtual reality, there’s a game for you. Dive into the awesome open-world of Red Dead Redemption 2 or the eclectic mixture of landscapes of Monster Hunter: World. For those of you who like power struggles, the remake of Shadow of the Colossus will have you fighting epic battles for hours, while the bleak world of Agony will keep your nerves screaming.

Here are some of the best games available now and a few that are coming up.

Released on January 26th, Dragon Ball FighterZ is the first real fighting game released from the Dragon Ball Z franchise. Whether you’re playing on the Xbox One, PS4, or PC you can enjoy the mechanics in this awesome game that lets you swap characters during a fight and play 3 vs 3 matches.

Widely popular in Japan, Monster Hunter: World has made its way to America. With breath-taking landscapes and monsters of every conceivable type, this game will have you pulling out every sword tree, horn tree, and glaive tree you have at your disposal. While undertaking these expeditions, you can level up your weapons and armor to take down larger, and more menacing, monsters. The release date for PC will be announced, but in the meantime, you’ll want to grab your Xbox One or PS4 controller and sprint for your nearest weapon. The monsters are coming.

#3 Shadow of The Colossus (Remake) 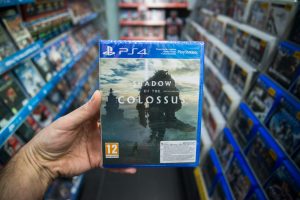 On February 6th, Bluepoint Games made many hopes come true when the masterfully created remake of hit classic Shadow of the Colossus was released. Available on PS4, this is the ultimate battle of David and Goliath. With nothing but your horse, grit, and survival instincts, you must climb the immense colossi and bring them down to your size. But, being built from stone and covered in dark fur, these 16 colossi won’t go down without you taking a couple of hits. Or dying. With the same gameplay as the original, ultra high-definition art, and a new control scheme, Shadow of the Colossus is a feast for your eyes.

But, where did the Colossi come from?

For those of you who are looking for some VR gaming, Polyarc’s Moss has your number. Telling the story of a big adventure and a little mouse, Moss has amazing graphics and will leave you thinking more about the little mice you see in your city. The experience is amazing and you’ll enjoy the broken fourth wall. Throughout the game, Quill (the mouse), is aware of your presence and helps you solve the challenging puzzles. Available on PS4, you have little choice but to help Quill.

Rated M+, Yazuka 6: The Song of Life isn’t for children. But, if you’re of a certain age and interested in crime, action, and the Japanese underworld, then Yazuka 6: The Song Of Life is right up your alley. With a reformed man forced to go back to a life of crime to protect those he loves, this game will suck you in and not let go.

This awesome two-player co-op game is played in split-screen. A Way Out features an amazing concept that shows a cut scene on one screen while the other player continues playing. This fantastic concept allows you to see your friend’s life play out on the screen while you keep playing. Another game from the minds that created Brothers – A Tale of Two Sons, A Way Out will leave you questioning the meaning of freedom and friendship. A Way Out is the story of two escaped convicts who search for adventure and all the different ways to live.

Available on PS4, Xbox One, and Origin, this game will give you all the feels. 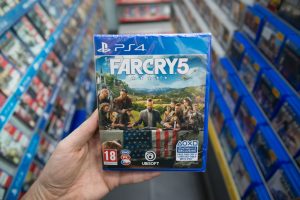 Battling insane villains, taking down enemy bases, and exploring this huge open world, the Far Cry series has become a staple on gamer’s shelves. Far Cry 5 may take some of its inspiration from 3 and 4, but you’re sure to see some innovative gameplay that’ll push it ahead of its predecessors. Released March 27th, Far Cry 5 is available on PS4, Xbox One, and PC. If you have the time and stomach for it, head on over to the forums for some political discussions and how Far Cry may or may not have addressed them.

Coming April 13th, We Happy Few, is set in a world that’s high on Joy. As pleasant as that sounds, this hallucinogenic drug isn’t so pleasant. Compulsion Games has created a dystopian world with perpetually happy people who follow strange, and mandatory, rules. This survival-based game will force you to question the meaning of happiness and the consequences of bottling it. Unique among games coming out this year, We Happy Few, may make you extremely unhappy.

Will you escape from the bliss of denial?

Look for this not-so-happy happy world on Xbox One, PC, Mac and Linux.

Oh right, almost forgot. If you die, you get to start over in a whole new world. No saves, just graves. Enjoy playing and remember to… smile.

Cyanide has announced they will be releasing Call of Cthulhu in 2018, but the actual date is still a mystery. This RPG features horrific monsters, maniacal mysteries, and 3D graphics that’ll keep you staring at your screen until you’re world and this world blurs. Call of Cthulhu will come to the PS4, Xbox One, and PC later this year.

Hell. Possessions. Madmind Studio’s Agony leaves no fear unearthed. You begin the game as a tormented soul, a Martyr, in the depths Hell. Your only saving grace, ha, is your ability to possess others. First, you’ll possess your fellow Martyrs and then demons. This game might just make you fall off of the edge of your chair, with its amazing graphics and horrific landscape. Agony was scheduled to be released March 30th but has been delayed. It will be available on PS4, Xbox One, and PC at a later date.

Whether you’re a fan of RPG, VR, or heartfelt adventures, these video games and all the others coming out will blow your mind, lower your stress, and keep your awesome, supportive friends sitting on your couch and eating all of your food.

Reasons Why You Might Need to See a Nutritionist

Sitting At Work is Killing You Slowly –...