Contents show
1 Well, the answer is — of course — it depends. This wouldn’t be much of an article otherwise.
2 Your number of past sexual partners is merely one facet, one single part of who you are. If she’s asking you for this number to judge your entire relationship — then maybe it’s time to move on anyway.

As soon as the question comes up, you might feel a chill crawl up your spine. If not a chill, then your mind might race. She asks you how many women you have slept with before her. It’s a question that will DEFINITELY come up at some point. And, likely, you already know how you’ll answer. Because you’ve, just as likely, had to answer this question before at some point. The best advice might be to not have to answer this question.

There’s a morbid curiosity with the knowledge of how many previous partners your significant other has had, but — for the most part — it does not really matter. There are exceptions, such as in situations with sexually transmitted disease, but for the most part, how many previous sexual partners you or your significant other have had doesn’t have much bearing on your future together. 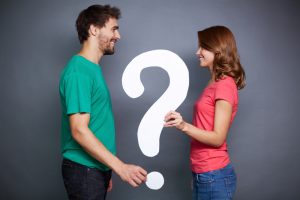 Yet, here we are. She’s asked. She needs an answer. Where do you go with that? There’s some motivation — and some data to back up this conclusion — for men to want to undersell the number. This is especially true the higher that number is. Well, you don’t want to be dishonest with your partner. That’s just a recipe for disaster. You want to build trust, and given how — in the long run — inconsequential this information is, lying about it makes no sense.  So, should you just pretend you didn’t hear her? Get up and leave the room like she just mentioned the Skull and Bones?

Well, the answer is — of course — it depends. This wouldn’t be much of an article otherwise.

Let’s say that things are pretty early on in the relationship. Curiosity gets the better of her over drinks and she asks you for your number.  You’re well within your rights at that point to avoid the topic. Don’t lie. You’ll have to correct the number later and that’s suddenly a much more awkward conversation than it needs to be. And it’ll dissolve some of that early trust that the two of you built up during these early days of your relationship. However, merely saying that you’d rather get to know other things about each other first before delving into more personal information from your past. Note that you want to stay in the present with her, and that your pasts — including your sexual pasts — don’t necessarily need to be a part of your now. Getting to know each other is more important than getting to know your sexual pasts.

Sadly, this has likely baited the hook for a future conversation on this topic. She’s probably pretty well-prepped for a number on the higher side given the avoidance for the topic. But, it’s a good policy to attempt to get across to her that you’re not trying to hide anything from her, just that the information isn’t important to your relationship with her.  As long as you’re being good about the use of condoms or other protection and there’s no history of sexually transmitted diseases or infections, then it has no bearing on the connection between the two of you.

If she ends up pressing you on the information or otherwise won’t let the topic drop, then that becomes a situation where it is totally up to you what to do next. You could pass along the information since she seems so curious. Your pasts were likely to come up at some point, so ripping the band aid off might just be better at this point. You might feel the need to fill in some of the blanks and work out some of the information — coming up with some excuses for your number, but this is unhealthy. Your number is your number. Own it.

There is some empirical data that shows that women are likely to move on from a relationship where they feel there partner has been too promiscuous in the past. Each woman has their own idea of what constitutes promiscuous.  This puts a little more pressure on this conversation, which is why it’s important to lay the groundwork of how your sexual pasts do not define your present and she’s not just another notch in your bedpost.

While dodging the topic entirely is a viable option, lying about it is not. If you end up staying together, the real number will likely come to the surface. Maybe not at the best time either. You many not be able to control when or how that information comes out. And as said before — this dissolves the foundation of trust.

The best thing you can do if you want to attack this conversation head on and get it out of the way. Prep yourself. Have a response ready to go. Don’t make the mistake of guessing how it is that she’s going to respond. Have a variety of ways to go with the conversation depending on how she may response, but trying to figure out how she will specifically respond to you is a fool’s errand. As a part of your response, explain how you got to your number. Don’t make excuses for it, but talk about when things got started, discuss episodes of your life that may have given rise to your higher number. And how those different episodes may have led to you valuing different things in your relationships with others. And how that’s changed. How you value other things now and you’re in a different place in your life.

Or maybe not. Maybe you’re not in a different place and you’re still looking to keep things open and easy — no strings attached. You don’t have to lie about that either if the topic comes up. Be up front about your intentions. You’re likely to be surprised by her response to it. Honesty is the best policy, and you’ll reduce the opportunities for drama in the future. Which is definitely preferable.

Your number of past sexual partners is merely one facet, one single part of who you are. If she’s asking you for this number to judge your entire relationship — then maybe it’s time to move on anyway.

Getting Your Girl in Bed for the First...