Many of you are struggling with mental health issues. There, it’s out there. In the quiet, dark, space of your bedroom or in your car where you sit alone. Don’t be weak, everyone says. With this advice being drilled into your head, you might be scared to cry with someone, tell someone, or that people will think you’re “less of a man”. But, how can you be less of a man? This doesn’t even make sense and people who tell you that you’re “less of a man” are people you don’t want in your recovery plan. Or life. Suffering through isn’t the answer. It just feels like that’s what the world wants you to do, right? Suffer through. Be strong.

But, that’s a hard act to keep up when depression, marital problems, eating disorders, anxiety, and/or post-traumatic stress disorder leave you feeling desperate.

Mental health issues tend to take a back burner to physical health. They’re often whispered about and hinted at, but never talked about openly. People don’t understand, so they stigmatize, which only makes talking about it that much harder. Especially for you.

You’re not a woman, but where’s the person saying, “You’re not exempt.” Well, I’m saying it,

“MEN feel sad, lonely, and scared, too. We’re not exempt.”

So, let’s talk about some of these issues that people don’t like to talk about.

There are over 6 million men, in the U.S., who feel overwhelming sadness and worthlessness most of the day, for months or years, on end. If you’re one of these men, you might say you’re tired, stressed, or irritated. While all of these are part of the depression picture, being honest about your “shameful” feelings is the way to get help. Tell someone you can trust the truth. This doesn’t have to be someone really close to you, it could be your colleague, boss, or a stranger manning a phone at a crisis helpline. Extreme sadness and apathy don’t have to rule your days. 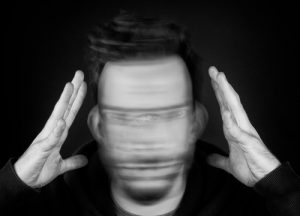 Around 2.3 million Americans struggle with cyclical mood changes from a seemingly unending bleakness to unending joy. This joy may feel pleasant, but it impairs your judgment and is dangerous. For you, this disorder usually starts between 16 and 25 years of age. There are a lot of resources to get help.

If you have bipolar 1, 2, or not otherwise specified (NOS), you might experience:

Bipolar Disorder is equally common for you and women. Episodes might not be months-long, but last for a few days, and in rapid-cycling bipolar disorder, your mood will change more often. In all of the variants of Bipolar Disorder, you may have a normal mood between depressive and manic episodes. Living with this disorder can be scary for you and your family, but there are many organizations, support groups, medications, and natural alternatives you can turn to for help. Through the Depression and Bipolar Support Alliance, you can find information and others who know what you’re going through.

Schizophrenia and psychosis are very real and frightening disorders. With both, you may lose your grip on reality. Delusions and hallucinations may fill your days and distort your thinking. But, know this, you aren’t crazy. Or alone. Schizophrenia affects around 3.5 million men, in the U.S. There are many men who can understand the fear, stigma, and hope that comes with a diagnosis of schizophrenia or psychosis. Sometimes, things can get jumbled up, but that doesn’t mean you’re any “less of a man”. You’re a good man who needs some support. 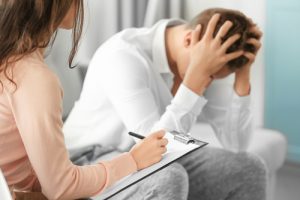 This is not just a woman’s problem. Struggles with musculature, eating, purging, or bingeing food might be your problem. It’s nothing to be ashamed of and there is help. What you think about your body, whether you don’t have enough muscle or you’re too skinny, needs to be talked about. Eating disorders have many symptoms. Here’s some of them.

Men make up 25 – 40% of eating disorders. This is not a woman’s disorder and there are programs for men, such as the National Association for Males with Eating Disorders (NAMED). You can talk to other guys, ask questions, and be understood.

Whether your days are filled with a jittery feeling through your body or fearing the worse, anxiety is hard to live with. You may not always do the things you want or talk to the people you’d like, but remember that everyday you do tons of things that scare you. And that’s brave. With about 19.1 million adults, in the U.S., joining you in the fight against panic, agoraphobia, or generalized anxiety disorder, you have many people to share your story with. And your fears. Talking can help you get all of the support you deserve.

If you’re wondering about your mental health, take a screening at http://www.mhascreening.org/. Just a couple of questions and you can explore signs of depression, anxiety, PTSD, bipolar disorder, and/or substance abuse issues that may be negatively affecting your life.

To talk to someone about suicidal thoughts, go to https://suicidepreventionlifeline.org/ or call 1-800-273-8255. Calls, or chats, are confidential, free, and available 24/7.

You’re strong. Mental health issues don’t change that. One phone call will only make you stronger.

Got Married. Sex Got Worse.

Clues she’s about to break up with you

Why You Can’t Get Healthy By Walking