Low Libido: What are the Causes in Men?

Is there a lack of “spark” in the bedroom or the urge to engage in sexual activity seems to be “low”? Most men consider this a low point in their lives and low libido might be one of the culprits.

It is relatively normal to lose interest in sex from time to time and the level of libido tends to vary through life. Generally, it is also normal for a mismatch of interest between partners at certain times to occur. Nevertheless, low libido among men for a long time is an issue for concern. It might also be an indication of an underlying health condition.

Depending on the root cause, there are various causes of low libido among men. Some are physical and others psychological, but sometimes it can be both.

It is important to note that testosterone is a vital male hormone. Among men, the testicles are responsible for producing it. This hormone helps in building bone mass, muscles as well as stimulating the production of sperm. The level of testosterone is also a factor in the sex drive of a person.

The testosterone level is low if it drops below 300-350 ng/dL. Once the level drops, the desire for sex also decreases.

Although the decreasing level is a normal part of the aging process, a significant drop can result in poor libido. Consult a doctor if this is troublesome. You might be given supplements or gels to use to improve the level of testosterone in the body. 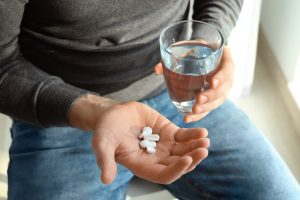 Using certain medications can result in a drop in the testosterone levels which leads to low libido. Some blood pressure medications such as beta-blockers and ACE inhibitors can prevent ejaculations and erections.

If you are experiencing any of these effects of low testosterone, see a doctor. In most cases, the doctor prescribes an alternative drug.

Restless legs syndrome is the overpowering urge to move the legs. In a study, men with this condition face a higher risk of developing erectile dysfunction than those without RLS. Remember that erectile dysfunction (ED) arises if a man cannot attain or maintain an erection.

Depression causes a big impact on all aspects of life. If a person is experiencing depression, there is an evident loss of interest in activities previously enjoyed including sex.

Low libido is a side effect of some antidepressants, specifically selective serotonin reuptake inhibitors (SSRIs). Consult a doctor if you are using antidepressants and have low libido. The doctor will deal with the side effects by adjusting the dosage or prescribing a different medication.

If you are not feeling well due to a chronic health condition that involves chronic pain, sexual activity is at the bottom of your priority list. Certain conditions such as cancer can cause a drop in the production of sperm since the body focuses on other vital functions to get through the day.

When suffering from a chronic condition, it is best to talk with your partner about ways to be intimate during this period. You should also consider seeing a relationship counselor or sex therapist about the issue.

Intake of large amounts of alcoholic beverages over a long period can drastically reduce the sex drive. Try to limit the intake if you do not want to lose the drive. Both men and women should not drink more than 14 units of alcohol a week on a regular basis. Furthermore, incorrect use of drugs also has a connection to a drop in the level of libido.

Men suffering from obstructive sleep apnea experience a drop in the level of testosterone. This results in poor sexual activity and libido. In a study, men with a severe case of sleep apnea also have poor levels of testosterone during the night.

Men who have low levels of testosterone also have poor sleep efficiency. It simply means that the drop in the testosterone level has a link with poor sleep, especially among older men.

The level of testosterone in the body has a link to libido. It reaches its peak among men during their late teens. Remember that men generally notice a difference in their libido level between the ages of 60-65.

Upon reaching the older years, it will take some time to achieve orgasms, ejaculate and reach a state of arousal. Generally, the erections are no longer rigid, and it takes a while for the penis to achieve an erection. However, there are various medications available to treat these issues. 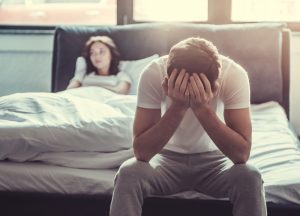 During scenarios or situations of high pressure, sexual desire might drop. The reason for this is that stress disrupts the hormonal levels in the body. Generally, the arteries constrict when under stress. This narrowing will limit the flow of blood and potentially result in erectile dysfunction.

The treatment for low libido often depends on the treatment of the root cause. There might be a necessity to shift to different medications. If low libido has psychological reasons, consult a professional for relationship counseling.

There are also measures that can help boost the libido. Some of the steps to improve the level of libido include the following:

The doctor might suggest therapy if the root cause is psychological. In most instances, low libido might necessitate the need to establish a close connection with your partner. It is not necessarily sexual but intimate. In addition, it is also best to talk with a therapist, either alone or with your partner.

There are several measures to improve low libido. Generally, it starts with a healthy lifestyle to restore the body on the right track and eventually enjoying a satisfying sexual experience.

How To Get Started With Cardio Exercise

Breaking Up: 5 Easy Ways to Do it