Things to Keep in Mind Before Dating a Younger Woman

I mean, come on, it’s depicted everywhere. You watch a movie or television show and 9 times out of 10 there’s a relationship shown where a younger woman is dating an older man. Heck, it happens in real life all the time. So much so that older men are now calling their women “baby,” and younger women are now calling their men “daddy.” And, it seems as if this phenomenon is not necessarily frowned upon; It’s condoned.

But, has anyone ever sat back and looked at the facts of dating a younger woman? Like, should this phenomenon continue? Or should this type of dating stop?

The power dynamic is very different.

The term power dynamic refers to what, or who, has the power in a relationship. For example, the power dynamic could come from a source such as money, age, or class. In this case, though, it’s age.

But, you also have to take into account that dating a younger woman will shift the power dynamic to you a little bit more. Considering you’re the older partner, you’ll typically be assumed to have more connections, more money, and more assets. Therefore, you’re in control (or should I say you have more control than she does).

Also, the bigger the age gap, the more power you’ll have. If she’s in her 20’s, for example, she’s just starting out in life. She has hardly any money (unless granted to her by wealthy family members), she doesn’t necessarily rank anywhere in the class margins, and she has hardly any world experience. You have the power and control here.

However, in power dynamic situations like this, you’ll have to be the judge and decision maker of each situation. Specifically speaking, the younger the woman is, the more control you’ll be allowed to have over her. Is this something you’re willing, or wanting, to do? Is this something you can see yourself in for a long period of time?

Tip: Use your own moral judgement and decide if the power dynamic is too skewed or if it’s just right.

If she’s too young, she’s probably not that mature. 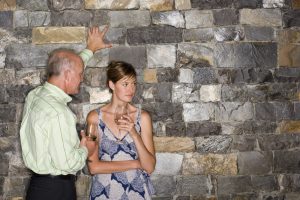 Depending on the age of the younger woman will depend on the maturity level she expresses. Don’t get me wrong, younger women are worldlier, more fun, and more outgoing. But, they are, and without a doubt, more immature. Why is this? Because they tend to not have as much experience as you do.

Let’s look at this a little deeper: If you date a younger woman, there’s a high possibility that she has not been through hell and back in her life. In other words, she has not dealt with hardships like losing a job, suffering a great loss, or dealing with a harsh break up. If this is the case, she won’t have much to talk about with you and she won’t want to settle down knowing she hasn’t experienced life to its fullest potential.

However, she may also expect way too much from you.

Typically, when younger women are interested in older men, it’s because they want something. They know that older men are financially stable and have the ability to support them. They also know that they are mature and more apt to treat them like ‘a real man should.’ She may want the stability of an older man, too.

But, most of these expectations that she has are completely unrealistic. Discuss what her expectations are before you go full force into a relationship like this. At least if you’re on the same page from day one, she won’t be able to complain about anything (although she may still try to).

On the other hand, you might be expecting too much from her.

You might be wanting to date a younger woman for many reasons, including but not limited to:

I hate to break it to you: all women have issues. No matter what age they are, you’re still going to deal with some things you just don’t like. Nobody is perfect, and you aren’t going to get a picture-perfect Barbie doll in this world.

So, if you’re only dating a younger woman because you have this unrealistic expectation that she’ll be flawless, get that out of your head (at this point you’re just being selfish and should probably go work on you for a little bit).

Once again, I suggest the two of you talk about and settle your expectations of one another before getting into the relationship. This way no one’s hopes will be crushed and you’ll both understand what’s going to happen.

Tip: Let her know you’re not here to be a sort of ‘father figure’ or ‘security blanket’ that she can lean on. Trust me, it will save you some time if she knows and understands this is not a possibility.

Realize that the two of you may not want the same things in life.

Even if you’ve managed to dodge all the above bullets, you still have to ask yourself (and she has to ask herself, too) one simple question: Where are either of you in the stage of life problem?

Does she want kids? Do you want kids? Where do you both stand with marriage? Do you want to travel a lot? Do you plan to keep this relationship for a long time? Are you still in the partying stage? Do you have certain priorities and obligations to tend to?

All these questions are valid topics to bring up. And if you two differ on a lot of answers, you’ll probably end up calling it quits soon after.

But just do me a favor: Consider everything I’ve said. Then, and only then, move forward with your relationship with a younger woman. You’ll thank me eventually.

Natural Remedies for a Hangover

What to say before sex

How to Flirt When You’re a Shy Guy