Traditional types of tea made from Camellia sinensis leaves have long been among the most consumed drinks in the world. These traditional teas include black, white, yellow, oolong, pu-erh, and green tea which is the most popular. Herbal teas, on the other hand, are different from traditional tea because they are made from various herbs and spices as well as plant-derived chemicals.

Drinking herbal teas or tisanes is currently an emerging trend among consumers who are looking for healthy beverage alternatives. Note, however, that herbal teas have health benefits different from what you get from traditional types of tea since herbal teas have different ingredients. Take a look at these five popular herbal teas and find out how healthy these drinks are.

If you’re experiencing sleep problems or having trouble falling asleep, drinking a cup of hot chamomile tea before going to bed just might be the solution you’re looking for. Chamomile tea has long been recognized as a relaxing drink and is popular as a sleeping aid. But is it really effective in helping people with sleep quality problems? 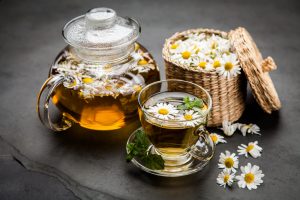 According to a 2016 study, chamomile tea may help reduce physical symptoms of sleep inefficiency as well as symptoms of depression due to lack of sleep. The subjects in this study were postnatal women who had poor sleep quality.

Note, however, that when the researchers did a follow up four weeks after the initial test period, they found that there were no longer any significant differences between the group that drank chamomile tea and the other group. This suggests that the benefits of chamomile tea on sleep quality last only for a short time; and will no longer persist if you stop drinking the tea.

As scientists continue to study the health benefits of turmeric, it’s becoming clearer that turmeric is one powerful superfood with a lot of medicinal benefits. Because turmeric has anti-oxidant and anti-inflammatory properties, drinking turmeric tea may help relieve symptoms of arthritis.

Turmeric has also been proven to have anti-cancer properties. As early as 1985, scientists were already looking into the potential of turmeric in reducing the development of tumors in mice. Recent studies on turmeric show that it enhances the effectiveness of chemotherapeutic drugs. Curcumin, the main active constituent of turmeric, can help decrease tumor mass and can help prevent a relapse, according to a 2017 study.

This doesn’t mean that only those with cancer should drink turmeric tea. Rather, it highlights how healthy turmeric tea is. Drinking this healthy beverage on a daily basis is also recommended for elder people. One of the recently discovered benefits of turmeric is its protective action against cognitive impairment which is associated with Alzheimer’s disease. And even though there is no established cure yet for Alzheimer’s disease, you can prevent it from happening simply by drinking turmeric tea every day.

Moreover, peppermint tea contains antioxidants and it also has antibacterial, antiviral, and anti-cancer properties. Peppermint tea is also known as having analgesic properties which means it can alleviate pain. It has also been found to promote fat burning which is another reason why this refreshing tea is so popular with people who are wanting to lose weight.

Peppermint tea is brewed from the leaves of Mentha piperita. The plant leaves contain rosmarinic acid and flavonoids which are antioxidants. In studies involving mice, it was found that peppermint tea helped relax gastrointestinal tissues. In humans, peppermint tea may help relieve irritable bowel syndrome or IBS. Other studies show that peppermint can help stomach pain and indigestion.

The plant Hibiscus sabdariffa is the main source of hibiscus teas. The sepals of the plant contain many healthy nutrients such as pectins for dietary fiber, polyphenols for antioxidants, vitamin C, as well as other organic acids. If you’re looking for a flavorful and colorful tea, hibiscus tea is one of the healthiest pink-colored teas. 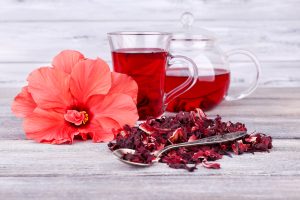 It has been found that the polyphenols in Hibiscus sabdariffa can prevent the growth of melanoma cells which are associated with skin cancer. Previous studies have also shown that Hibiscus extracts may help fight leukemia and breast cancer. Hibiscus tea is also recommended for lowering blood pressure and for relieving oxidative stress.

Hibiscus tea is also good for lowering cholesterol levels, to boost the immune and digestive systems, and to treat liver diseases. There have also been reports that hibiscus tea may speed up metabolism; which suggests that it can be good for people who are looking to shed off a pound or two.

Rooibos (Aspalathus linearis) or red bush is a plant native to South Africa. Rooibos tea is made from the leaves and stems of this plant which contains high concentrations of vitamin C and a lot of polyphenols. It contains very little tannins, the compounds that make tea bitter. Instead of being bitter like black tea, rooibos is slightly sweet. This natural sweetness is one of the reasons why rooibos tea is popular.

There have been several studies on the health benefit of rooibos. It was found that rooibos tea can help protect against oxidative stress. Moreover, rooibos can also help prevent liver damage, thanks to its high antioxidant content.

Rooibos tea is also known to help cure headaches and asthma. It is also recommended for people with insomnia, bone weakness, and premature aging. For people with diabetes, drinking rooibos tea daily may help in reducing blood sugar levels. This is because aspalathin, the primary flavonoid in rooibos tea, has anti-diabetic properties.

Keep Quiet and Carry On: All About Erectile Dysfunction

8 Truths About Life As A Special Needs Dad