Hyperprolactinemia Can Make You Infertile and Impotent

If you’ve been struggling to achieve erections and you think your breasts are getting larger, you may be suffering from a condition called hyperprolactinemia. This is a condition wherein your serum prolactin levels are elevated.

Read on and learn about how hyperprolactinemia can make you suffer from sexual dysfunction and infertility.

Prolactin is a hormone found in both men and women. In women, the main function of this hormone is to promote milk production in pregnant and breastfeeding women. In men, prolactin plays a role in testosterone secretion by enhancing the receptors for luteinizing hormone in the Leydig cells.

The secretion of prolactin is heavily influenced by dopamine which exerts an inhibitory control over prolactin. On the other hand, the production of prolactin can be stimulated by thyrotropin-releasing hormone (TRH) and dopamine receptor antagonists. In men with hypothyroidism, TRH levels are typically high and this can lead hyperprolactinemia.

In many cases, men with hyperprolactinemia often display no overt symptoms. However, when the prolactinoma that’s causing excessive production of prolactin has grown in size, it can exert pressure on the tissues surrounding your pituitary gland. This can lead to headaches and visual problems.

Because hyperprolactinemia causes extremely reduced levels of testosterone, you will most likely suffer from erectile dysfunction as well as decreased libido. Decreased facial and body hair may also happen as a result of low testosterone levels. 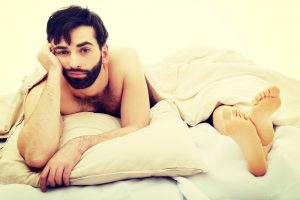 You may also develop infertility since you’re deficient in testosterone, a hormone that’s necessary for spermatogenesis. Since prolactin stimulates breast tissues, you may also experience an enlargement of your breasts which is a condition referred to as gynecomastia.

Hyperprolactinemia may also cause hypopituitarism, which means your pituitary gland has a decreased production of other pituitary hormones like luteinizing hormone, gonadotropin-releasing hormone, and follicle-stimulating hormone.

Sexual Dysfunction and Infertility Due to Hyperprolactinemia

An endocrinopathy or a disease pertaining to one of the endocrine glands is one of the known causes of erectile dysfunction. Most of the time, when an endocrinopathy affects erectile function, the underlying cause is hypogonadism, a condition wherein the testes do not produce sufficient amounts of hormones and sperm.

Hyperprolactinemia can induce hypogonadism because it interferes with the hypothalamic secretion of GnRH or gonadotropin-releasing hormone.GnRH is important for normal reproductive function since it triggers the pituitary gland’s secretion of luteinizing hormone.

When luteinizing hormone is secreted, the hormone binds to the receptors found in the Leydig cells in your testicles. The Leydig cells then produce testosterone, which is necessary to support sperm production.

Oligospermic men who are suffering from reduced libido, impaired erectile function, hypogonadism, and reduced sperm motility should undergo a serum prolactin level evaluation since hyperprolactinemia is a probable cause of these group of symptoms.

Hence, the resulting low levels of testosterone caused by hyperprolactinemia leads to erectile dysfunction and reduced sexual drive. The good news is that once your prolactin levels normalize, your testosterone levels will also return to normal and your erectile function will be restored.

Since dopamine inhibits the production of prolactin, doctors often prescribe medications that increase the activation of dopamine receptors. Cabergoline and bromocriptine are usually prescribed for people with prolactinomas.

In cases when prolactinoma affects the patient’s vision and the patient is not responding well to oral medicines, surgery may be performed to remove the tumor in the pituitary gland. In rare cases wherein oral medicines and surgery are not sufficient to get rid of the tumor, radiation therapy may also be needed to shrink the tumor.

A transcranial surgery, on the other hand, may be necessary if the tumor has grown to a significant size or if it has spread to other tissues in the brain. In most cases, prolactin levels return to normal after the removal of small pituitary tumors. However, there are many cases wherein the tumor comes back within five years after the surgical procedure. 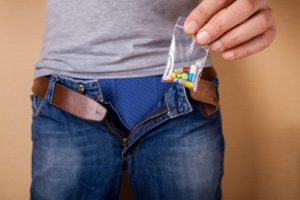 All-natural male sex enhancement supplements can help you manage your sexual dysfunction through natural means. Composed of herbal ingredients such as maca and Tongkat Ali, it can help improve your ability to achieve erections through enhanced penile blood flow.

By increasing your testosterone levels, this also helps improve your sex drive. In addition, it contains popular aphrodisiacs such as muira puama and damiana. With its unique formula, herbal supplement is effective in enhancing your fertility as well as your sexual performance.